You might think that “things” have always been connected to the internet. Computers, mobile phones, even printers have been connected for years. A lot of the current talk and investment in Internet of Things is large sensor networks and taking information from our environment. What we at DoES Liverpool like to think of when we talk about the Internet of Things is a whole lot more personal and unexpected. How about a bubble machine that blows bubbles when people mention you or your business on Twitter? Or perhaps a clock or dial that instead of showing time or statistics shows where someone is? These are just two of the ideas that members of the DoES Liverpool community will be bringing to Internet World this month.

But first, what is DoES Liverpool? We are many things. We are an online community of creative and often tech savvy people, of tech startups and “makers”. DoES Liverpool is also a physical space. It provides a co-working office space for members of the community to hot desk from or to take a permanent desk. There’s also a shared workshop with lots of equipment available for use; traditional tools such as soldering irons and band-saws to the more modern digital fabrication equipment like the laser cutter and 3D printers. We also hold regular events on many topics from specific programming languages like Python and Clojure through to more business focussed events like Lean Liverpool and Saturday Startup Club. We have a great community coming up with some wonderful ideas, and we’re looking forward to showing some of these to you at Internet World 2013. 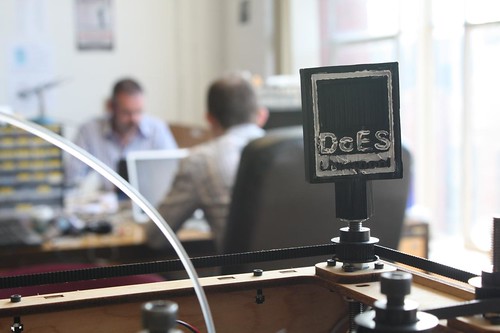 Adrian McEwen has been putting things on the Internet for many years. He led the team who developed the first full web browser for a mobile phone, and his code (he’s slightly ashamed to admit) made it onto the Amstrad Emailer. He was recently described as an IoT pioneer by Kevin Ashton, the person who coined the term “Internet of Things” in the first place! Adrian will be bringing two of his IoT inventions to Internet World. Bubblino, the aforementioned twitter activated bubble blowing machine, was actually one of his first IoT projects but is well loved at conferences around the UK and has now been sold to various people in the UK and Europe. The Acker’s Bell was a more recent commision to provide Liverpool Startup ScraperWiki with a bell that would chime each time they made a sale. The mounting for the bell was designed and laser cut in DoES Liverpool with Adrian developing the software and electronics. Usually living in ScraperWiki’s office in Liverpool the Acker’s Bell will be visiting London for you to see at Internet World 2013

With another DoES Liverpool co-founder, Hakim Cassimally, Adrian has spent the last year writing the definitive IoT book – Designing for the Internet of Things. Both Adrian and Hakim will be available to discuss their book and IoT in general, and of course you can pre-order the book on Amazon!

Inspired by the clock owned by the Weasley family in the Harry Potter books, the WhereDial provides a delightful way to make a personal connection with a family member or friend. The WhereDial is made from laser cut plywood or colourful plastic and features a list of location categories around the dial. Through the cloud based location aggregator – MapMe.At – the WhereDial can retrieve a person’s location from FourSquare, Google Latitude and a variety of other services. It then rotates the dial to show where the person is. It’s a great device for people who are less comfortable using mobile phones and computers but is also a really handy glanceable object that fits nicely on the desk of a technophile too. The WhereDial was designed and is built in Liverpool by John McKerrell, also a co-founder of DoES Liverpool.

Perhaps saving the best for last, the final headline item that we’ll be bringing to Internet World 2013 is the Good Night Lamp. Darling of CES and Gadget Show Live, these lamps have a superstar team behind them. They are the brainchild of Alexandra Deshamps-Sonsino, previously a co-founder of smart product design studio Tinker London and the organiser of the monthly Internet of Things meetups in London. She launched the Good Night Lamp as a startup a year ago by committing to taking a booth at CES; 10 months of development later and with a live Kickstarter campaign garnering much publicity she took CES by storm. Her team includes our own Adrian McEwen as CTO; John Nussey as Head of Products and interior designer & architect Konstantinos Chalaris as Lead Designer.

We really hope you will enjoy our exhibition and go away inspired, potentially with some ideas for an IoT product of your own! DoES Liverpool is all about inspiring people to start interesting businesses and while our focus is in Liverpool, we know that IoT is going to take off around the world!