The DoES Liverpool Three-step Plan for Success

Do. Lots of people talk about amazing things, but then don’t make a start on them. We want to focus on and encourage the doing.

Doing is hard. We’re a community that helps and supports each other to do. We understand that sometimes it’s you pushing forward while someone else answers emails or empties the bins, because next week it’ll be the other way round. 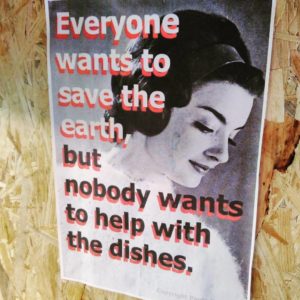 DoES Liverpool isn’t providing a service to customers who pay us money, we’re a community that spreads its costs between its members.  Recognising, appreciating and acknowledging that all that behind-the-scenes, less sexy support work is what allowed the epic headline-grabbing sh** to happen.

As you can see, “epic sh**” is many things to many people. It matters less what everyone else thinks about what you’re doing, and more that you’re pushing yourself into new ground.

Step Two: Tell People About it

If you’re putting the effort in to do the work, you owe it to yourself to tell people about it. This is often as hard, if not harder, than doing the work but it’s important.

At the very least, post something about it to any social media accounts where you hang out (if that’s Twitter then include “#weeknotes” so it will get picked up and shared in the next weekly blog post).  If it’s something you can take a picture of, or film a short video of it in action.  Show the thing.

Social media is great for short-term sharing, but things quickly disappear into the stream.  The next step is to have some sort of home on the Internet where you can collect things.  That could be a portfolio website or a blog, whichever is easier for you to set up.  Having your own domain is even better because it gives you some protection for when you need to change the underlying service.  If I want to recommend you to someone, or show them your projects, I should be able to send them a link; not suggest they sift through your social media profile looking for the important bits.

Make the time to write up a blog post about the project at the end. Get into the habit of taking photos and videos of things as they progress. Write things yourself and find your own voice, or make room in the budget to pay someone to film it or write about it for you. Or both.

It’s not about Marketing, at least not what anyone imagines when they think about marketing with a big M. It’s just about talking to people about what you do. Don’t worry about repeating yourself, just find different ways to talk about and show what you do rather than posting the same tweet again and again. We’re humans, not robots.

We should support each other in sharing our work.  Remind and encourage each other to post photos or write things up.  Shout about others’ achievements: it’s always easier to talk about someone else’s work than your own, so we should do that for each other.  It’s not about mindless retweets, but sharing good work and interesting projects when you see them.

Step Three: Go to Step One.

Success isn’t about discovering “this one neat trick” to short-cut the work.  It is built on lots of small steps and achievements.  The next big thing is a lot of small things.