As you may have seen in our social media,  we’ve picked our second set of people to get Boost Membership!

In the end we had 37 entries. Two winners were picked randomly and have now confirmed that they can take on the places starting in April. Here’s some brief details of our winners:

Kirsty is our new desk member. She lectures in journalism at the University of Huddersfield and is studying for a PhD at UCLAN. The picture shows her speaking at an event she created called Standup for Journalism, where she trained journalists to do standup comedy.

She’s hoping that having a desk in a coworking space with others will help her get her PhD finished. 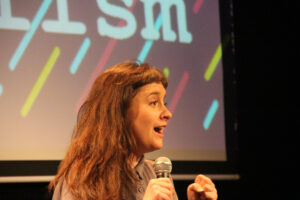 She also sent us this photo of a hand embroidered hoop she made a few months ago, so maybe she’ll be taking advantage of our maker space as well. 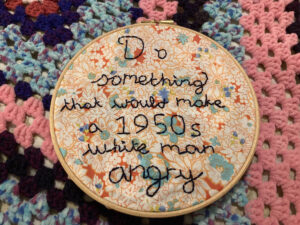 Georgia is our new workshop member. As you can see from the picture, she’s already made it in to the space – she came in to this week’s Maker Night to introduce herself and pick up her tag. 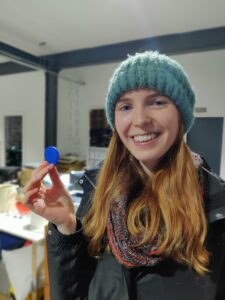 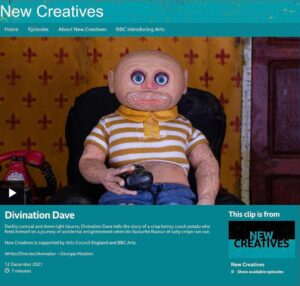 Georgia is looking to develop new ways to make stop motion puppets, props and sets and is excited to use the space to create armatures as well as miniatures and clothing for her puppets.

We’re really looking forward to welcoming our new members into the space more. Neither have spent much time at DoES Liverpool yet and they’re both eager to get started. If you see them while you’re in be sure to say “Hello!”

Unfortunately we only had two places to offer so we know that, as last time, there will be some people left disappointed now. We do hope to continue running this scheme on a regular basis though and there should be more information about the next cohort soon.

For the geeks amongst us… as mentioned we had 37 entries. Ten of those were for a full time desk and the other 27 for workshop membership. The Google Form puts the entries into a spreadsheet and we picked a winner by using “randomise range” on the rows. After that it was a simple case of going down from the top and picking the first of each type of membership, which brought us to Kirsty and Georgia. Although once again no rubber balls or extravagantly designed and named machines were involved, this time we did use our Electric Liver Bird to display the results!

One comment on “Introducing Our April Start Boost Members”