I’ve just got back from a short trip to the “Textile City” of Vila Nova de Famalicão in Portugal – as it might be of interest to other members of the DoES Liverpool community, I’ve written this short blog about the visit. If there’s anything you want to know more about, get in touch – I’ve got contact details for all the companies too.

I believe the first links between Liverpool and VNF came about when representatives from VNF including Komlan Gnamasti, Isaque Pinto and Augusto Lima attended the Liverpool International Business Festival in Jue this year, and that as a result Deputy Mayor Gary Millar was asked to bring a group of people out to Portugal to find out about the textile industry there, and to celebrate international day. I went as a representative of DoES Liverpool.

The other people who went were:

We were also joined by representatives of the British Chamber of Commerce in Portugal.

I arrived in the evening along with Gary Millar and Chris Warren. We met up with the others in the centre of Porto and went on a quick sightseeing trip. It definitely deserves a longer trip sometime. 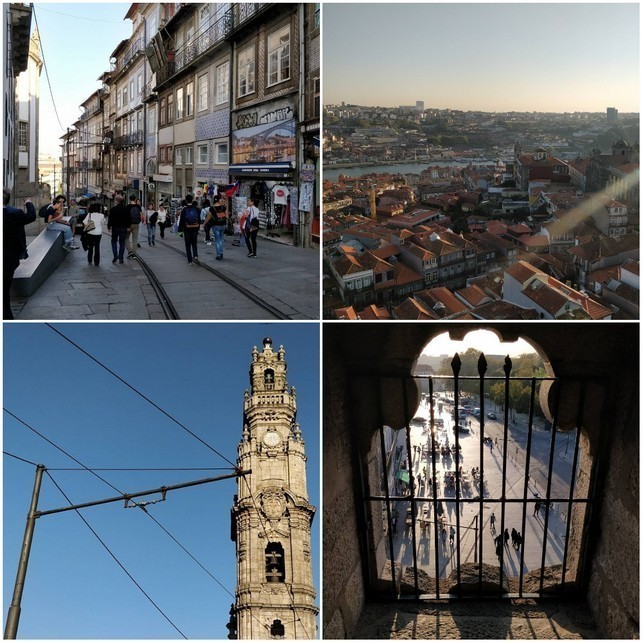 Clockwise from bottom left: tower of the Clérigos Church, a Porto street, and views of a street and the river Douro from the church

We then visited a shop called ‘meia.dúzia’ which sells a large range of different flavoured jams, honeys, and olive pastes in tubes – the owner was apparently inspired by the tubes used for oil paints, and the business is a successful graduate of the VNF incubator program. We tasted a selection of jams, along with cheeses and cold meats. 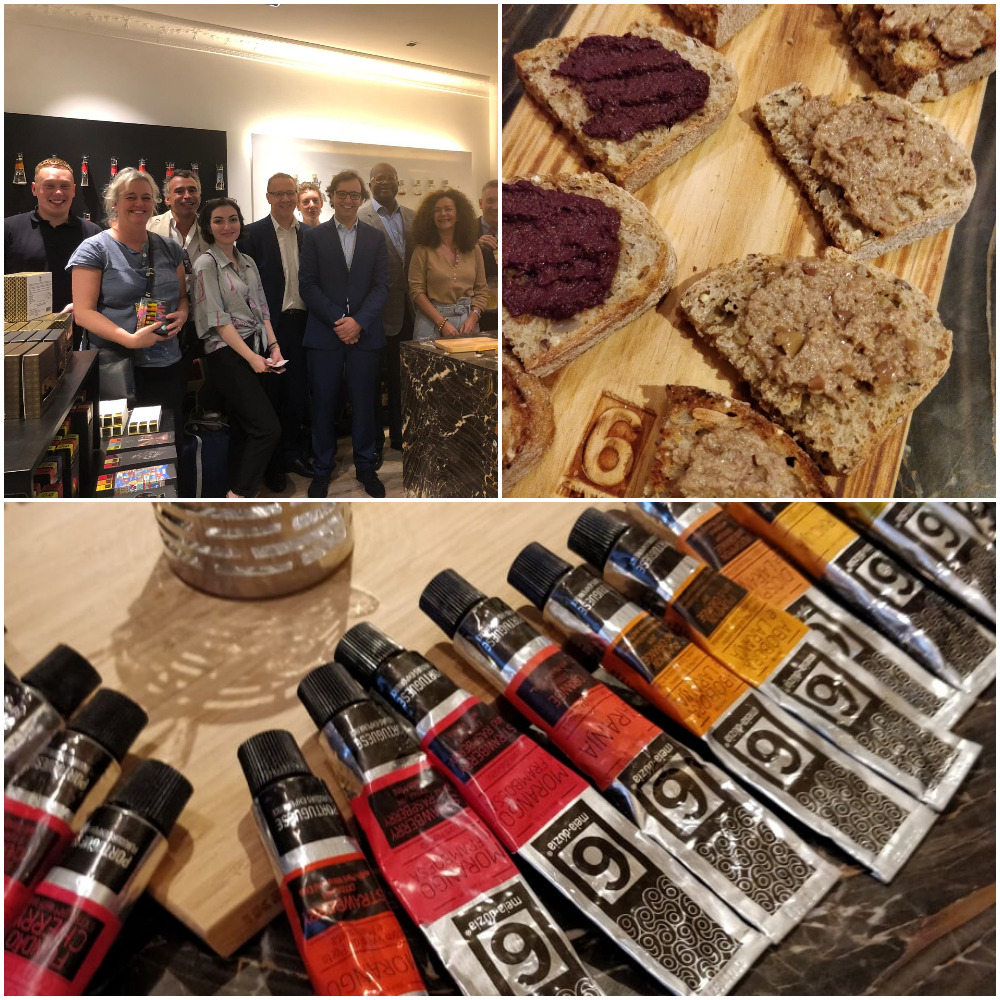 After that we went to a lovely restaurant en route to our accomodation in VNF.

After breakfast, the coach took us to the town hall square to have our picture taken with the mayor,  followed by a visit to the offices of the incubator program for a presentation about the textile industry in VNF. It was very interesting to find out about how the textile industry was an integral part of the community and the major local employer, and also worked to involve students while they were still at school, and on pre-university placements. 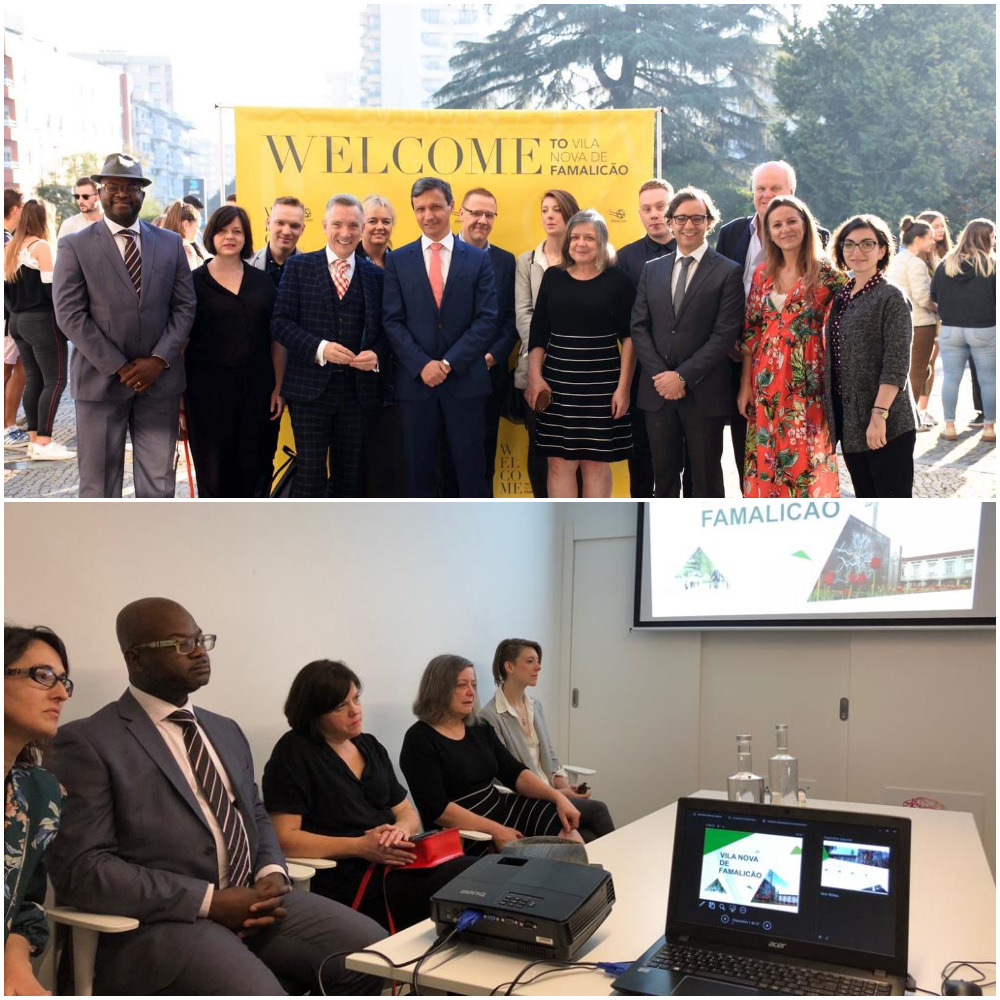 Top: members of the Liverpool group with the mayor and VNF representatives, Bottom: watching presentation

Then it was off to visit the incubator businesses, which are housed in a building belonging to the Riopele textile company. Businesses can stay in the incubator for up to 2 years before moving on to stage 2 accommodation. I can’t remember what the rent was, but everyone was surprised at how low it was. There were several software companies, along with textile-related businesses including one producing streetwear  and another that acted as an agent arranging different types of sportswear manufacturing. 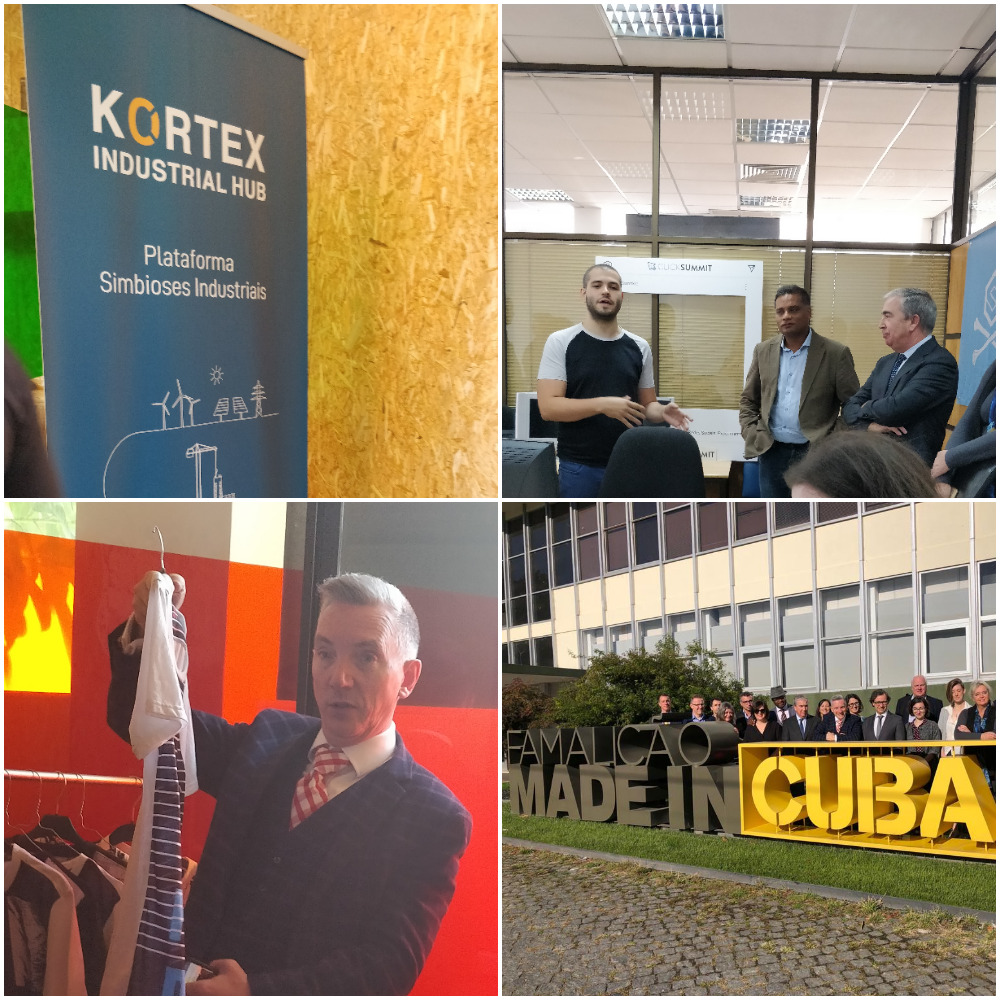 Following our visit to the incubator, a private/public partnership, we moved on to visit a more traditional part of the Riopele textile company, a factory employing more than 1000 people, of a type that has become rare in the UK.

Riopele was formed in 1927 and is still run by a member of the founding family. It’s a vertical producer so does everything from spinning, weaving, dyeing and applying finishes to producing finished clothes. 96% of its output goes directly to export, with the remaining 4% going to other Portuguese producers who then export their output! We were able to see the production and quality control process, before moving on to a presentation, visit to the design studio, and working lunch in the board room. 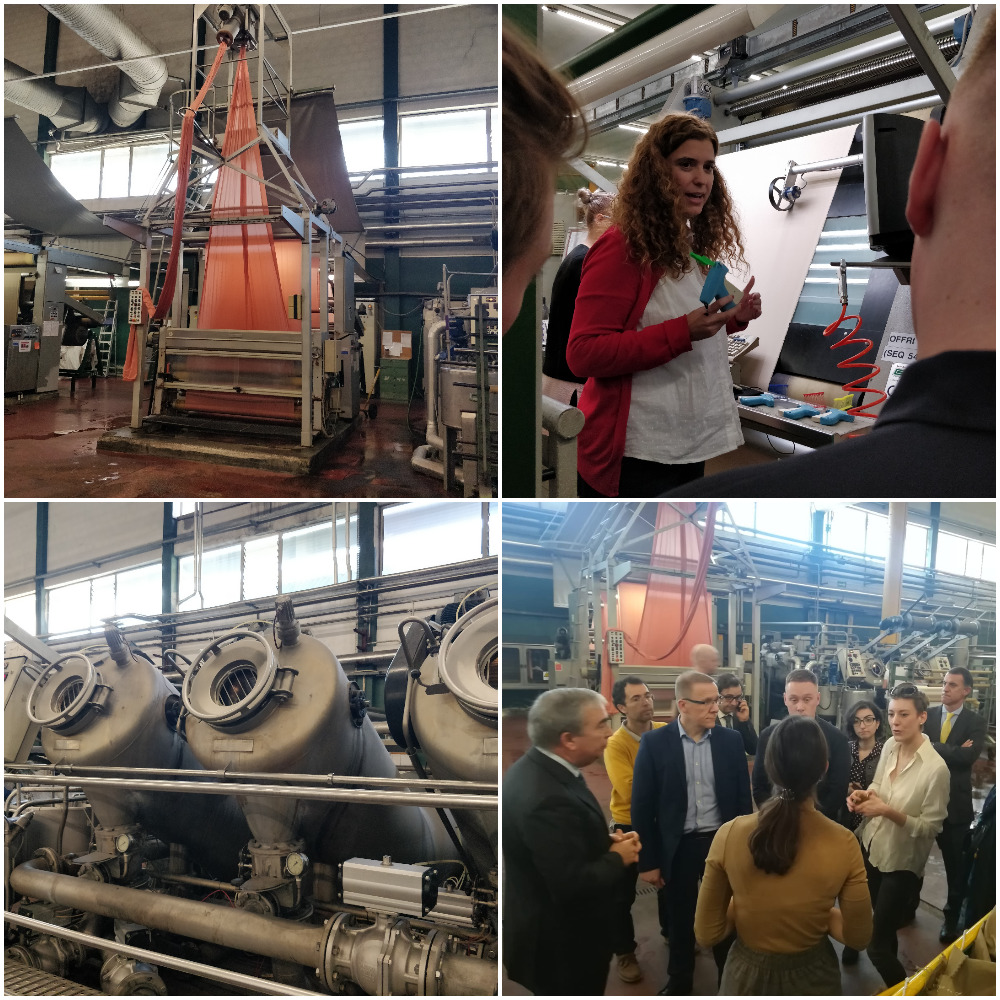 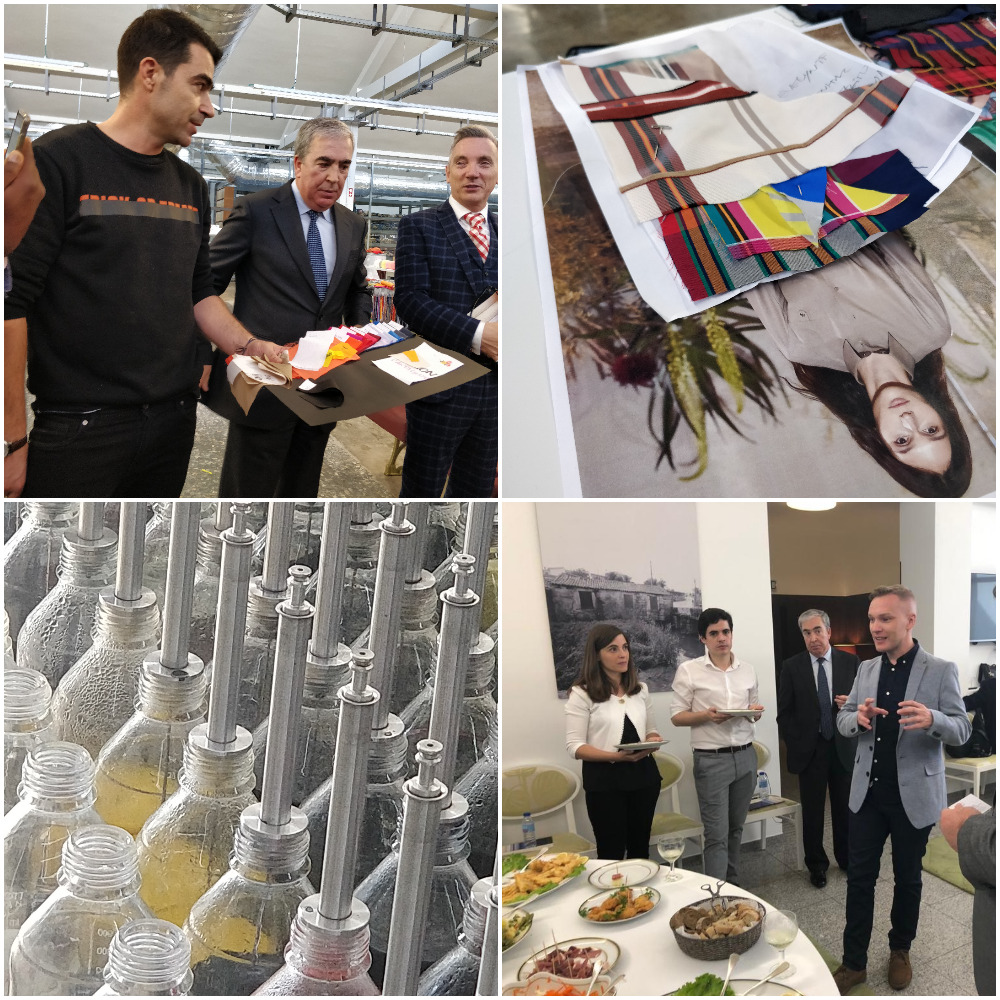 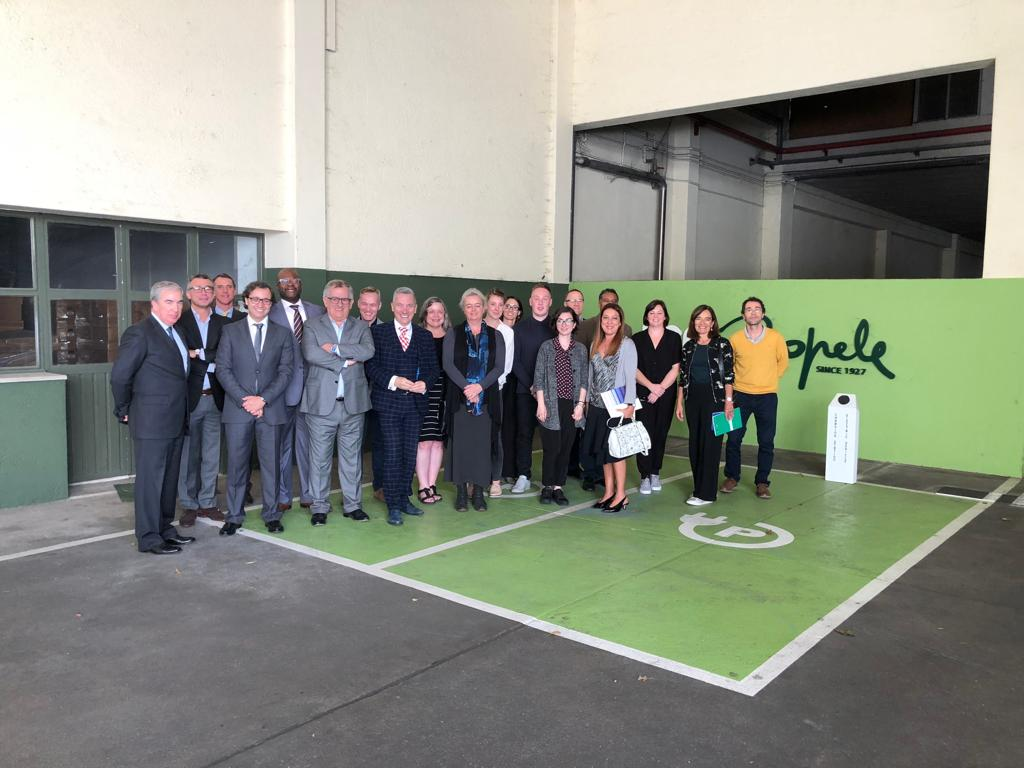 Group photo outside the Riopele factory before leaving

Following lunch, we moved on to  AAC Textiles, a production and development studio for high end brands. As well as interesting fabrics, finishes and embroideries, members of the group found elements of the interior design inspiring. 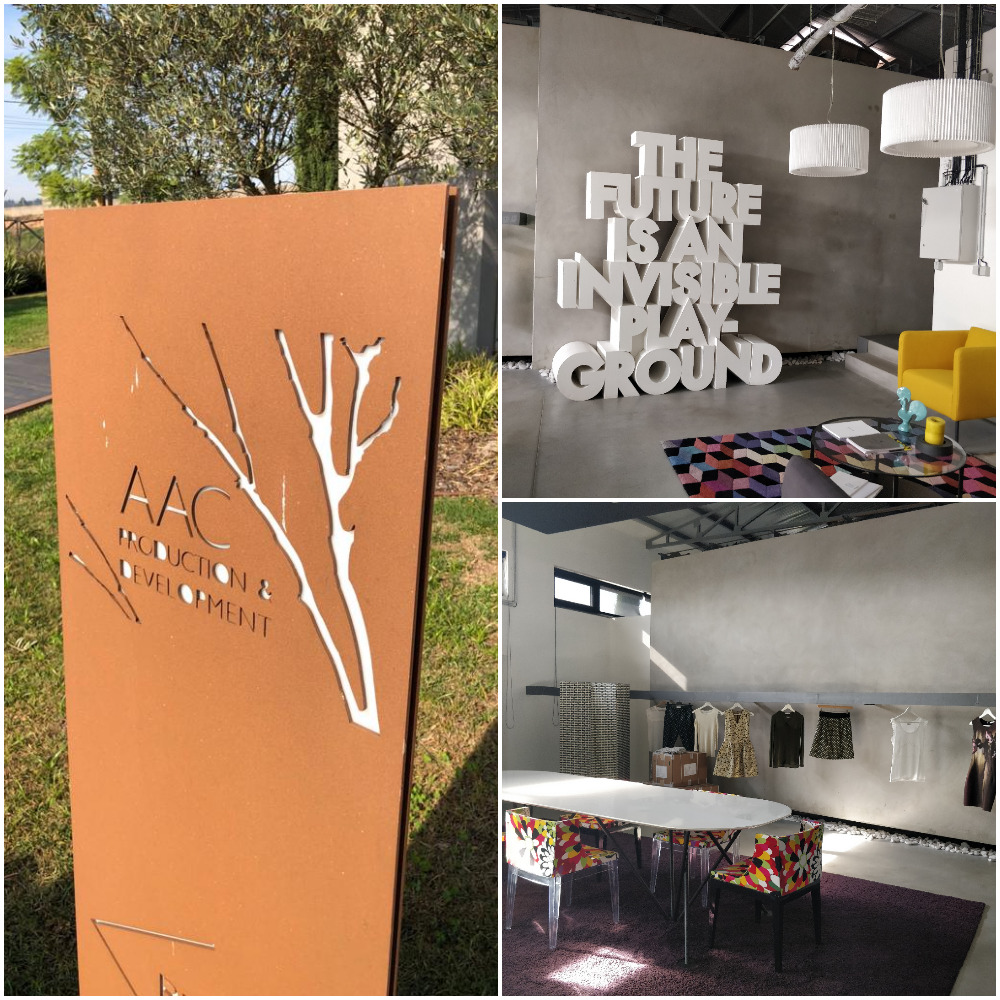 From left: AAC sign, inspiring quote in polystyrene, and table 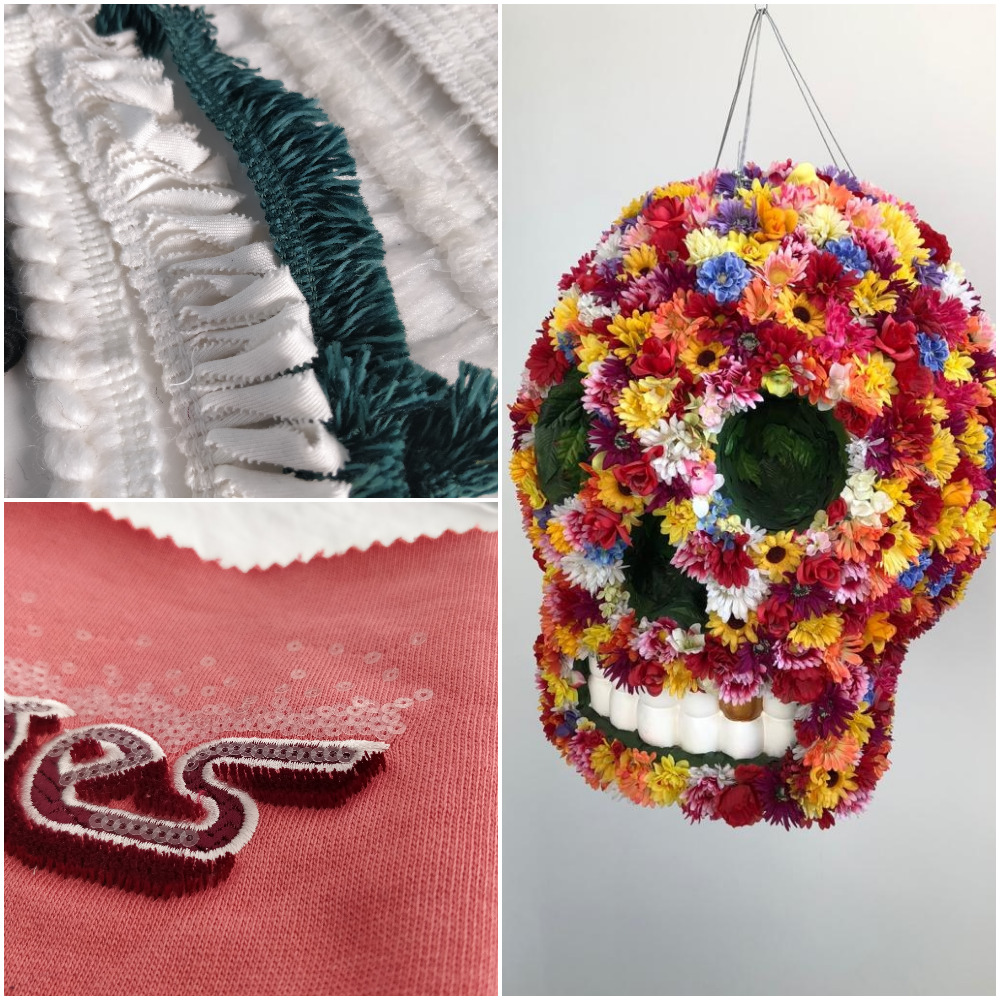 After AAC, we got back on the coach and moved on to the textile and nanotech research centres of citeve and CeNTI. These are housed in the same large building complex. After a presentation on their facilities (we’ll be getting a copy of the slides later if anyone needs more information on what they do), we were shown round both facilities. 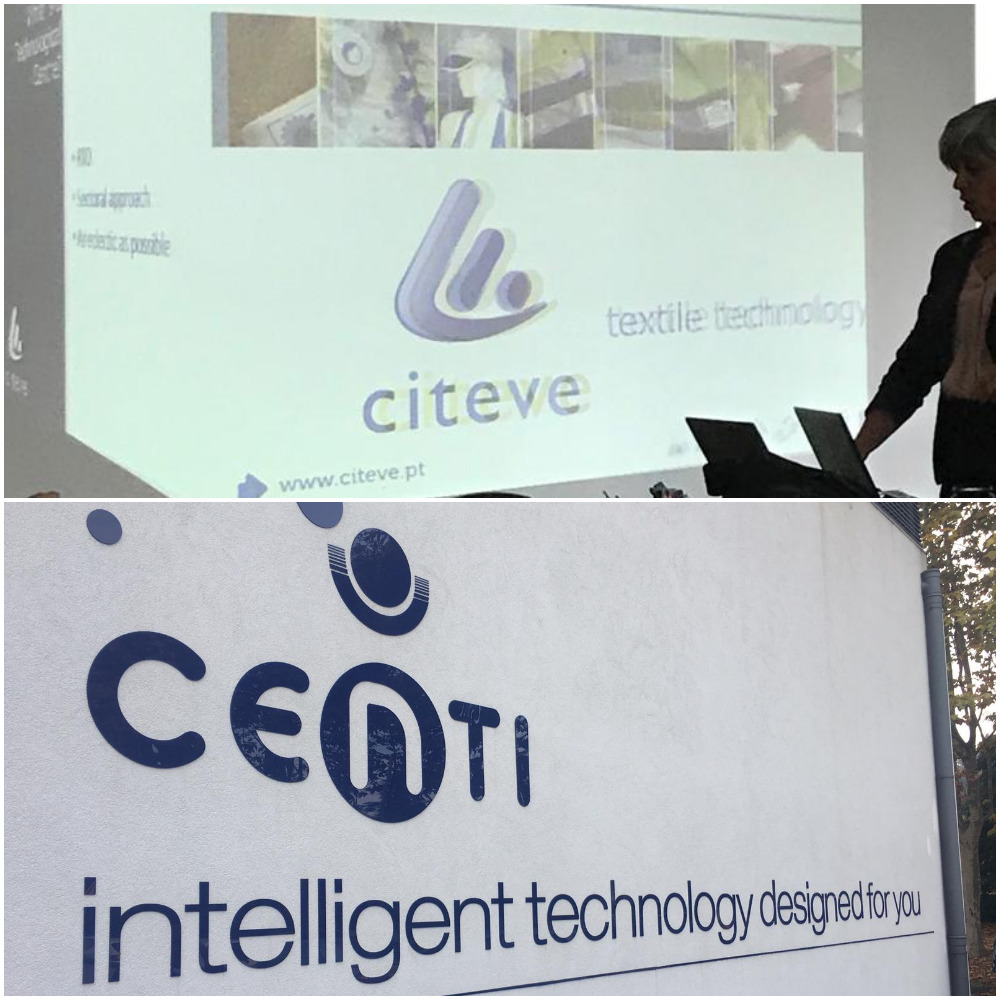 Citeve run annual fashion design competitions on the themes of recycling and tech (maybe something DoES Liverpool could get involved in!). 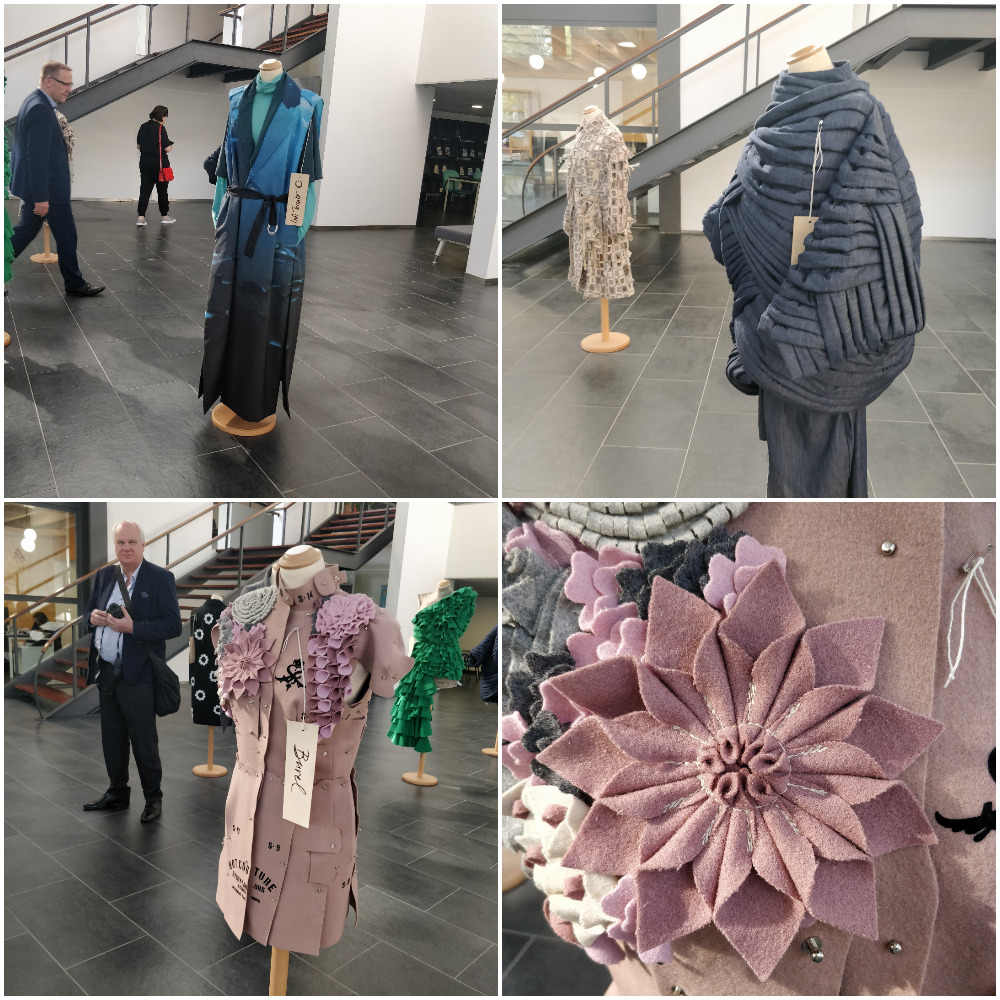 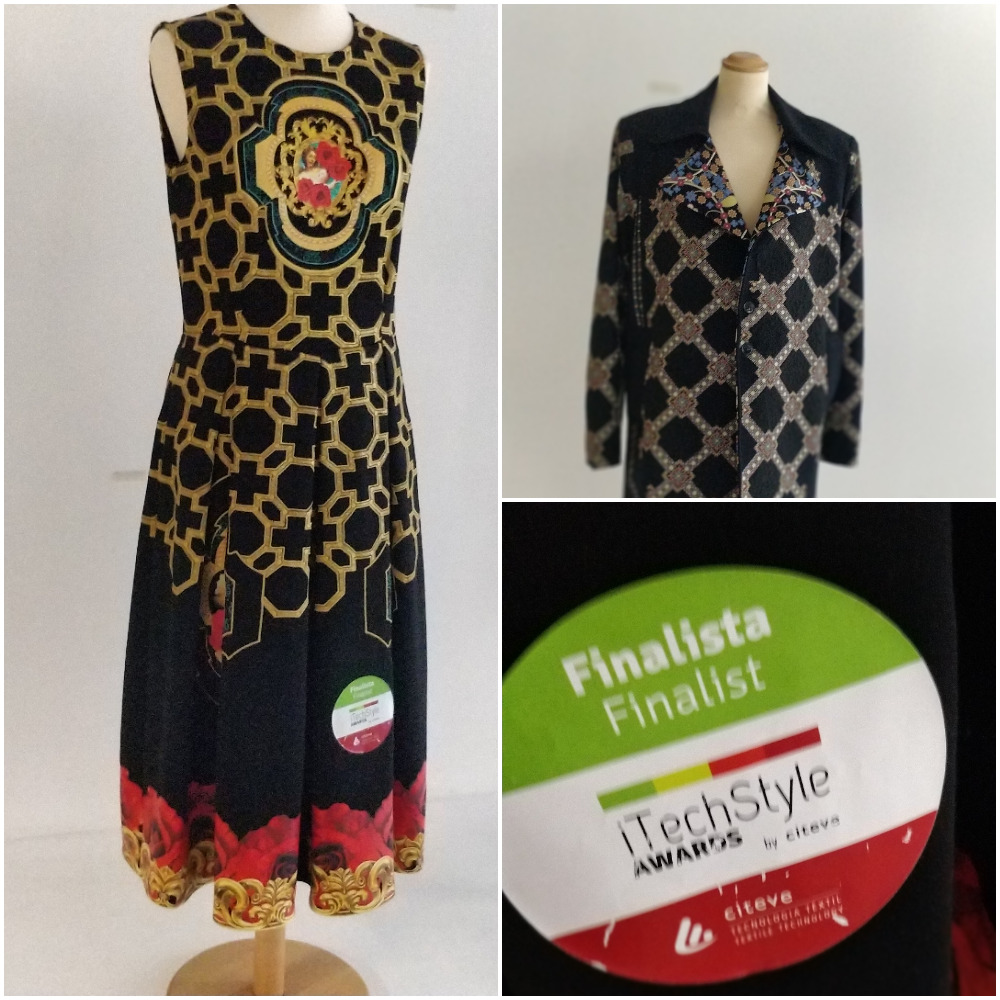 Following the presentations we visited the labs, and facilities that could be used by students – in many cases the equipment mirrored that which we’d seen earlier in the factory. 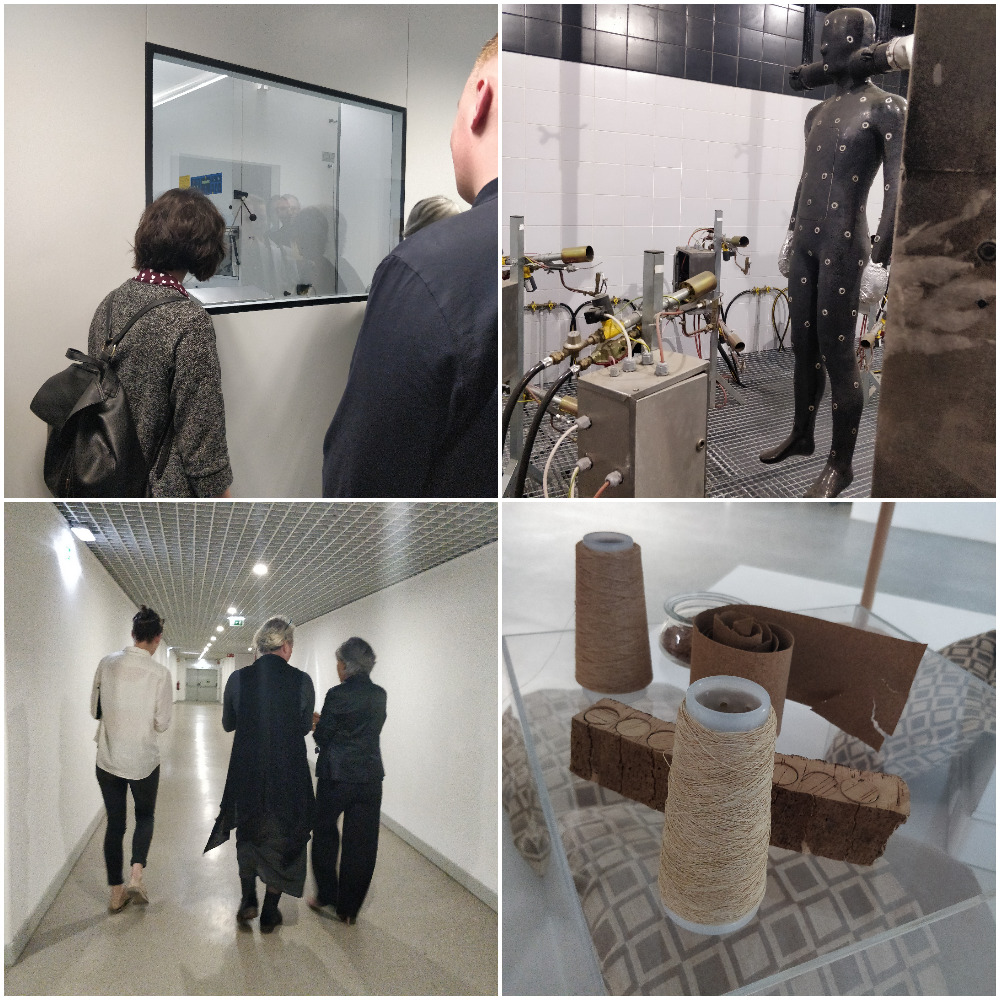 Clockwise from bottom left: long corridor (lots of labs on either side), view through window of lab, room with fire testing dummy, cork coated cotton fibre 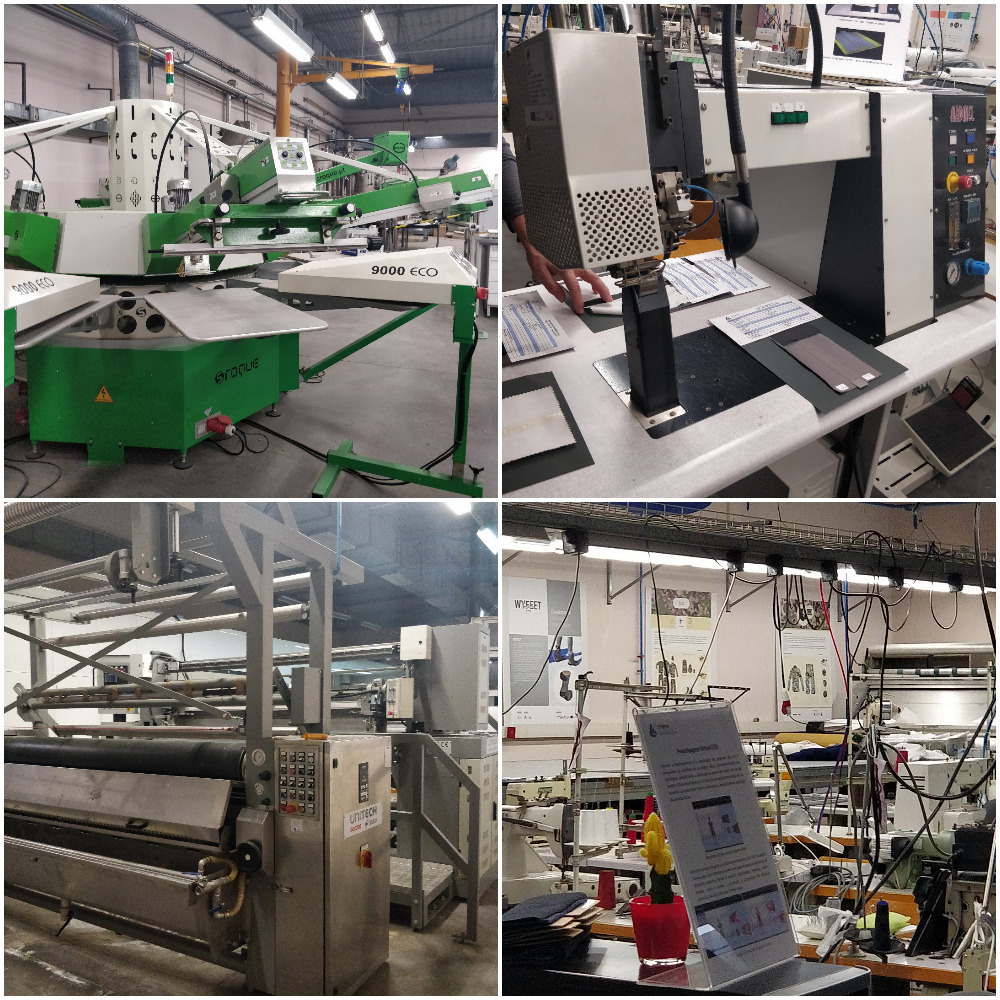 Equipment available for use by students

We were able to see some of CeNTI’s work with screenprinted conductive and electroluminescent materials. These produced flexible and unobtrusive circuits that could be used in car textiles, for example. CeNTI works with companies, including startups, to produce small volumes of product, for proof of concept etc. 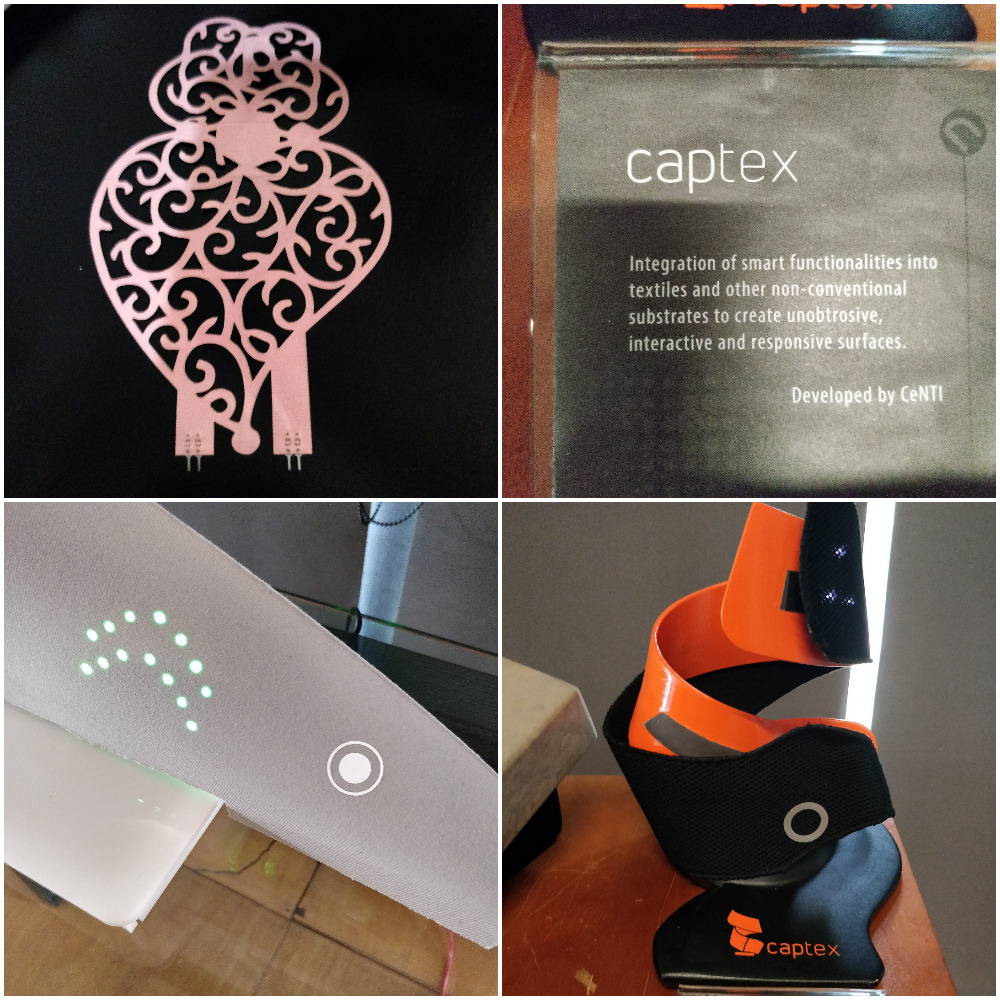 The two Fashion MA students who were with us were very interested in getting placements in CeNTI, AAC or Riopele and it looks like they might be able to.

Once we’d finished at CeNTI, we went back to the town hall for International Day celebrations: in addition to the Liverpool contigent, there were representatives from the town in Galicia, Spain where Inditex (owners of Zara) are based, and a large group of French students.

Komlan, who arranged our trip, is from Togo, and put on a traditional shirt. He’s married to a Portuguese woman and has a Languages company in VNF. Sandy from East Kilbride, also moved to be with his wife. He was involved in the Manchester music scene before moving to VNF and performed several songs. 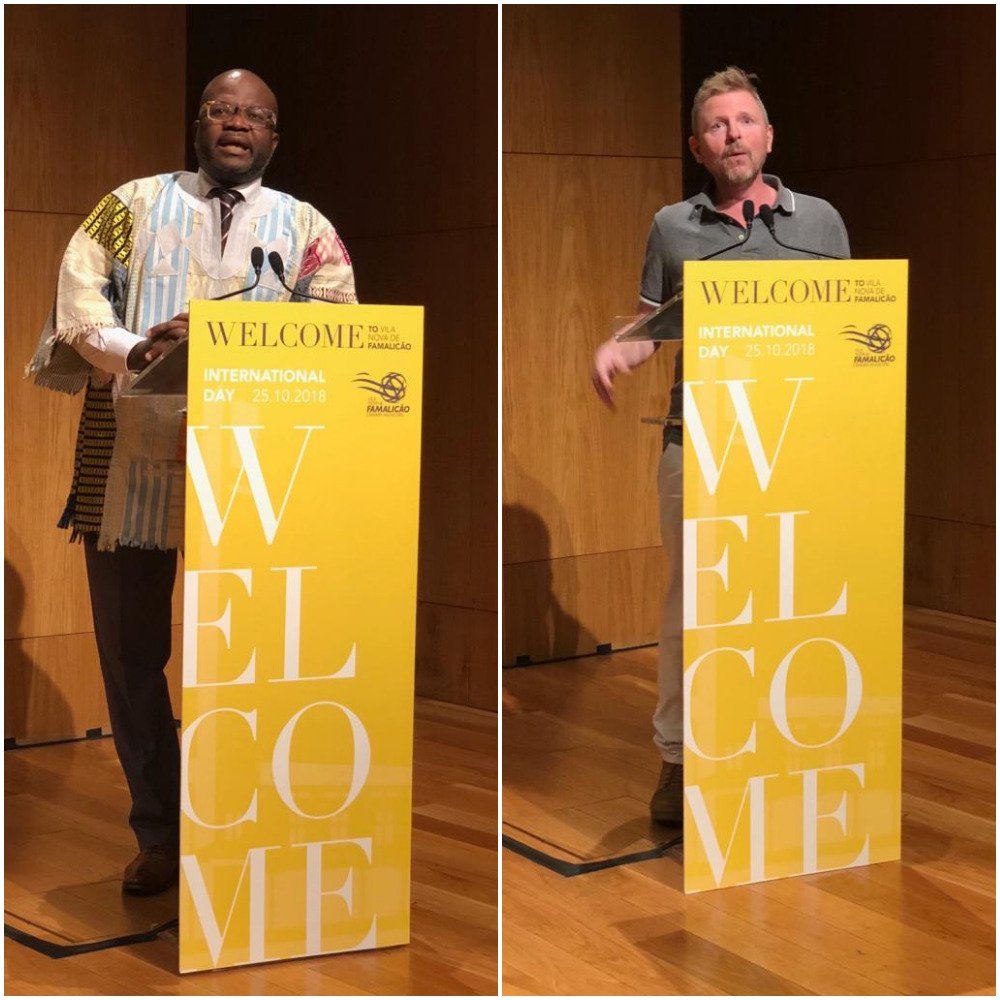 There were more speeches; from the Spanish mayor (in Spanish), from Gary Millar, and from the mayor of VNF, then all the members of the partnership got up to take a bow. Then there was one more group photo opportunity for us (I don’t think I’ve actually included all of them here!) and Gary presented the mayor of VNF with some music produced at Parr Street Studios, before we left for another great restaurant meal. 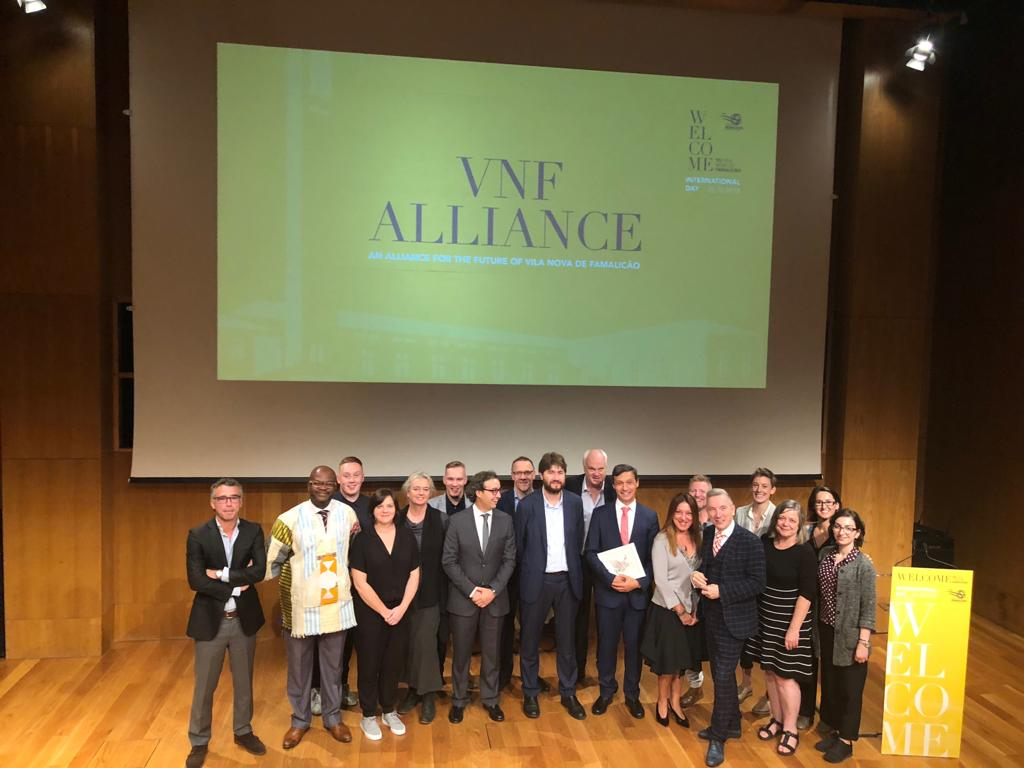 Last group photo of the trip 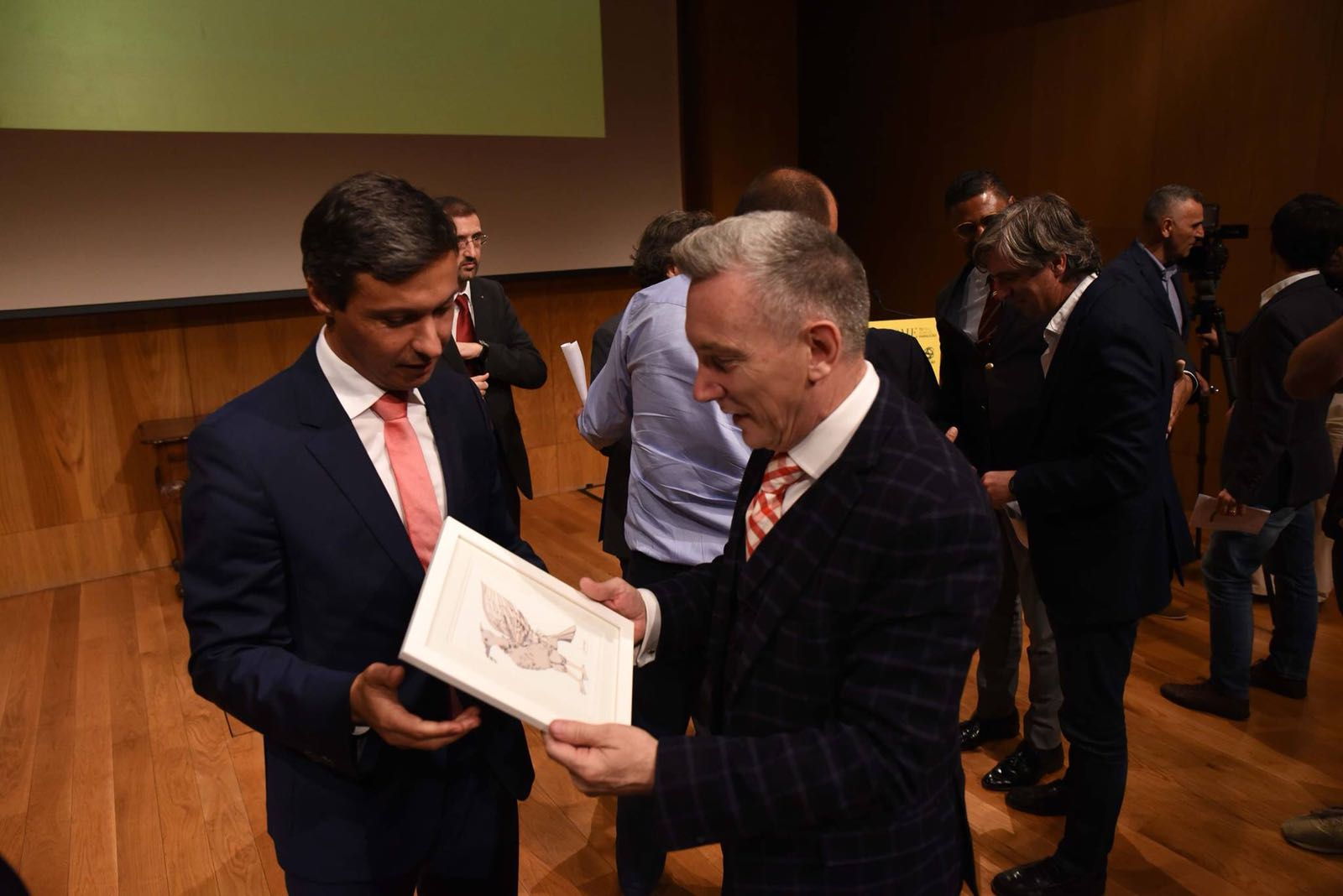 Gary making a presentation to the mayor of VNF 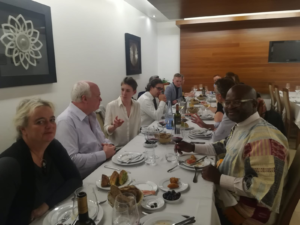 On Friday morning we left early to get the flight back to Manchester (several people made the sensible choice to fly back to Liverpool later and had time to do some more sightseeing in Porto).

Definitely a worthwhile trip, and with several possible areas of interest for DoES Liverpool. I will try to follow up the flexible, printable electronics at CeNTI.

As several members of the Liverpool group pointed out, it would be difficult to implant something like DoES Liverpool, which has grown organically over quite a long time, in a new location, but maybe we do have experience that could help others.

A group from VNF are likely to be visiting Liverpool in February, so maybe we can come up with some interesting ideas for collaborations before then.

One comment on “Visit to Vila Nova de Famalicão in Portugal”