One of the best ways to get involved with DoES Liverpool in general is to sign up for the Google Group (Sometimes also referred to as the mailing list) where people post notices about upcoming events both at DoES and around Liverpool if they think they’ll be of interest to the community and have discussions on topics such as 3D Printing, Laser Cutting, Startup Communities, Trips to look at Traffic Lights, local politics and Beer.

The group is open for anyone to join and you can get the messages sent directly to your email inbox either every time someone posts, or in a digest format. 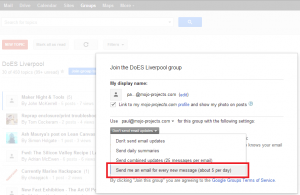 The Google Group can be found at: http://groups.google.com/group/DoES-Liverpool