DoES Epic Trips are occasional trips to interesting places arranged by members of the DoES Liverpool community. So far we’ve visited the Stafford Beers Archive at LJMU, the Liverpool Traffic Control Centre, and Toxteth Fire Fit Hub Fire Station & Community Centre. The fourth trip (back in June) was to the Merseyside Waste Recycling Centre. I posted a report on the mailing list and am finally posting it to the blog! 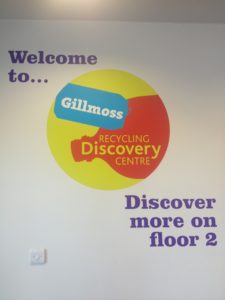 Just back from the epic trip and thought I’d send a report before I forgot everything. The trip was to the Merseyside Waste Recycling Centre and showed us all about how the recycling for Liverpool, Halton & Knowsley is handled.

Essentially we were shown a large warehouse building with lots of equipment and conveyors in. The recycling comes in mixed together as Liverpool and the other areas have a single bin into which plastic bottles, cardboard, paper, glass & metal cans all go. Out the other end of the system comes bales of cardboard, paper, plastic bottles, aluminium, steel and piles of broken glass. A mixed collection tends to result in more recycling, assumedly because it’s easier for us lazy people. As well as I remember the process works as follows:

(I’m pretty certain I’ve got the order of some bits wrong but you get the gist.)

It’s all very organised and as you can see many of the processes they use are actually quite obvious, once you know them. A big aim of theirs is to reduce the number of “contaminants” that make it through the process. Obviously the best way is to stop them entering the system but they also have lots of ways to reduce them along the way. Most of the time contaminants can be dealt with at a later stage (e.g. glass bottles should have labels removed, but they can deal with it if they’re left on). It was quite interesting as they tried to juggle the message of “please prepare your recycling” and “we recycle as much as possible of whatever you send to us”.

Main takeaways for what they want people to do:

Quite a long [post], always worth writing things up when fresh in your mind 🙂 They do these tours regularly because they’re trying to get the message out about how to recycle and why. If it turned out that more people wanted to go then we could probably arrange another tour. I imagine the above will suffice and that you will all now recycle lots.