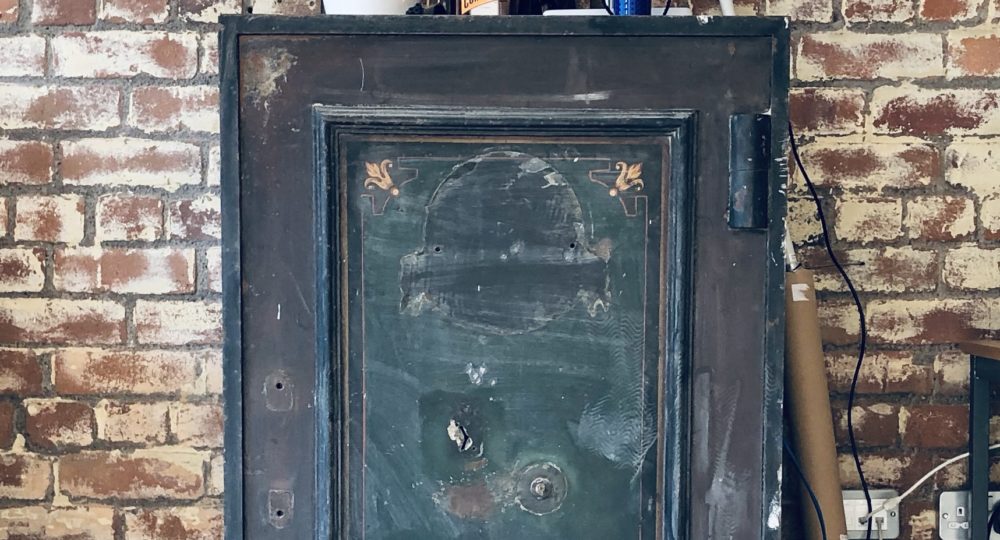 What a difference a year makes. When I wrote last year about DoES Liverpool’s finances we were celebrating six years in business, we had ten thousand pounds in our bank account and were expecting to make a profit for the year. We were also in something of a precarious position regarding our lease in the Gostins Building and were considering a move that could be a great opportunity but would also be a bigger outlay. We also seemed to find ourselves in a real downturn in terms of desks being rented and were unsure of whether we could get ourselves out of that hole. So, where are we now?
END_OF_DOCUMENT_TOKEN_TO_BE_REPLACED

Continuing our “DoES wants to move” season… we should probably start again with some background. DoES Liverpool was incorporated, after a few months of discussion, on the 10th June 2011. To speed things up we ended up asking an accountant to set up the company for us, as a result we ended up with a Community Interest Company limited by shares, with our articles of association declaring that we will operate as a non-profit. As it turns out we may have been better off setting the company up as “limited by guarantee”, we even suspect that this contributed to us being denied rates relief by the council, so we’re going to look into changing this probably as part of the general “move” process.

So, we’re a “not for profit”, does that mean we have to make a loss every year? Surely that means we’ll go out of business?! Actually no, the important thing is that any profit generated is reinvested in the company and the community rather than taken out by shareholders (which is why it would be easier if we didn’t actually have shareholders!) In fact DoES Liverpool was a profitable company from the start, with no real capital invested – just a small director’s loan which was quickly paid back – we really had no choice to survive any other way.

Until the most recent financial year that accounts have been prepared for DoES Liverpool has made a profit each and every year. That financial year we had to start paying business rates, including some that were back-dated, so it wasn’t a big surprise there was a small loss. We ended the year with plenty of money in the bank

(Note that IANAA – I Am Not An Accountant, I’ll do my best with the figures in this post but there’s a decent chance I’ll make mistakes)

FreeAgent is also reporting we’ve made £37,394 in our last year that ended 30th June 2017 and should make a profit, it doesn’t offset for deposits we’re holding so that might drop but looks like we held our own.

So it looks like we’re doing pretty well going from nothing to quickly reaching around £40k/year. Really though DoES isn’t trying to make vast sums of money, all we need is to pay the rent and to have enough money to buy useful equipment like 3D printers and laser cutters. In fact the rise in income was matched by a rise in outgoings so that would have been around the time we took on the separate workshop (and kitchen) and then Dinky, our events room. 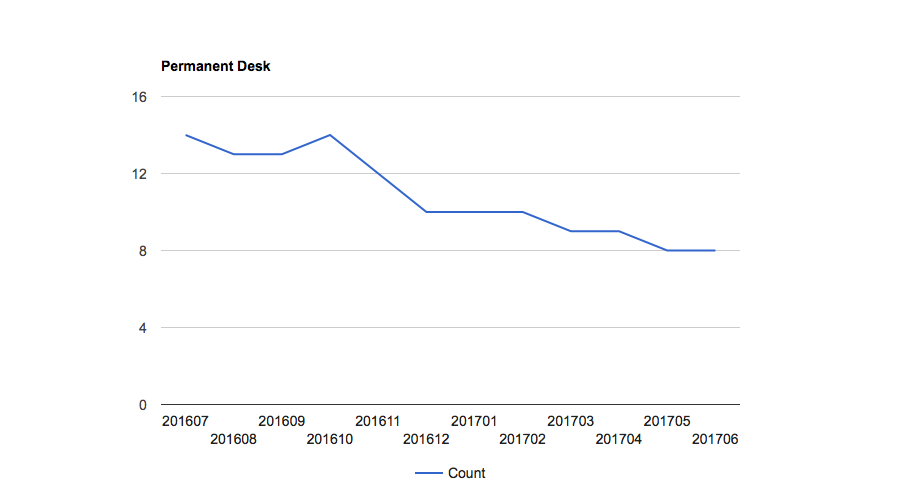 We’ve seen rises and falls before, an especially big one a few years ago that we did manage to pull ourselves out of as you’ll see in this graph: 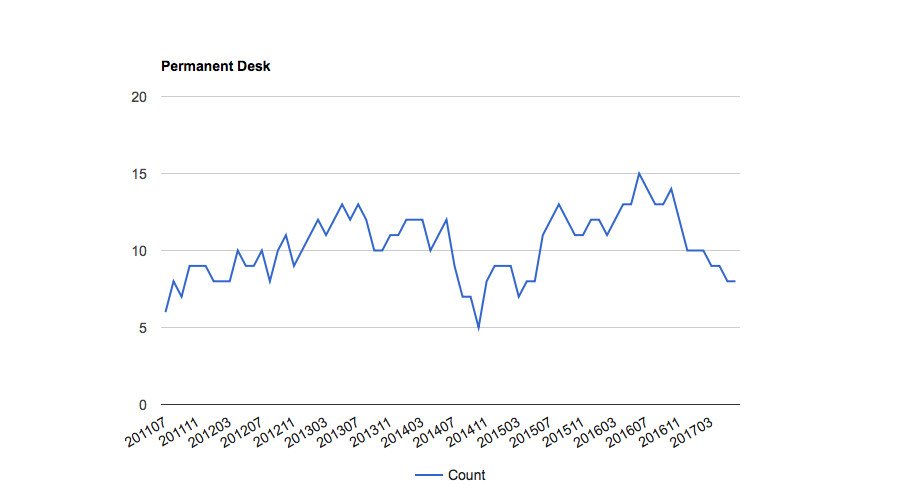 Permanent desks have always been our main source of income. In some ways they’re the easiest things for us to sell as they make the biggest impact on our finances, but they also result in bigger problems when people decide to move on. Here’s a graph showing our income broken down into categories: 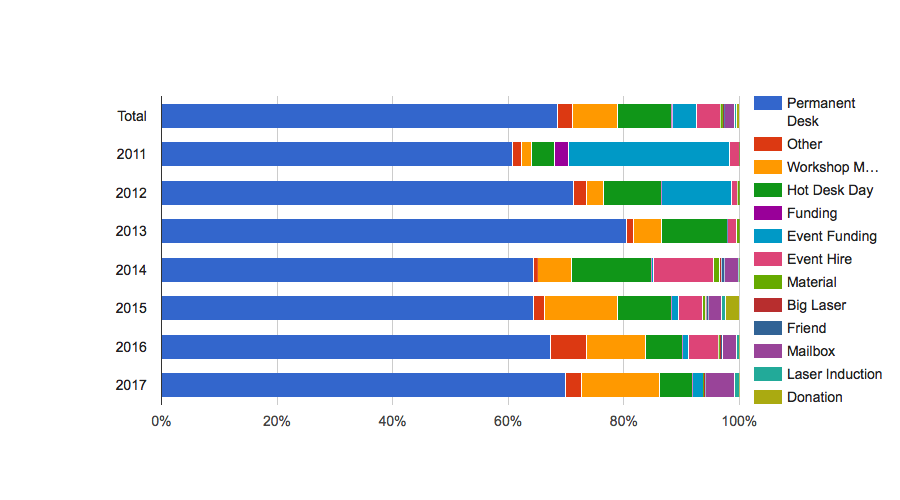 Taking out the permanent desks gives a richer break-down: 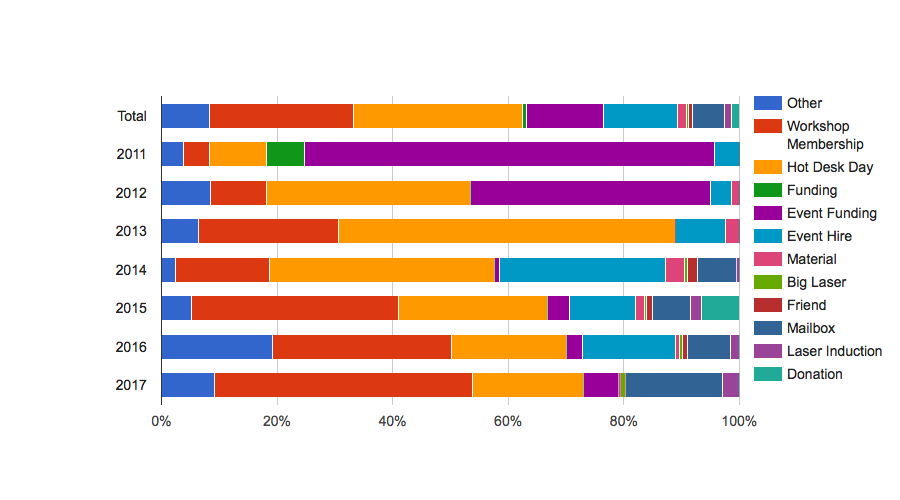 Bearing in mind that permanent desks have always provided over 60% of our revenue it’s still interesting to dig down into the other categories. Our first six months in 2011 actually seem to have involved a lot of funding for events. This isn’t a big surprise, we were excited to have a new space so we ran a BarCamp and probably a few other events. We were also being given money to support Maker Nights which certainly helped in those early days. It’s actually a shame we’re not running events so often these days so hopefully that’s something we’ll look at more in the new space.

It looks like hot desks have become a smaller proportion of our income and, workshop membership seems to be growing. You start to see our registered address mailbox service creeping in too in the recent years. While hot desks may be a smaller proportion they’re still a large part of our income as you can see from the following similar graphs which aren’t scaled to percentages. 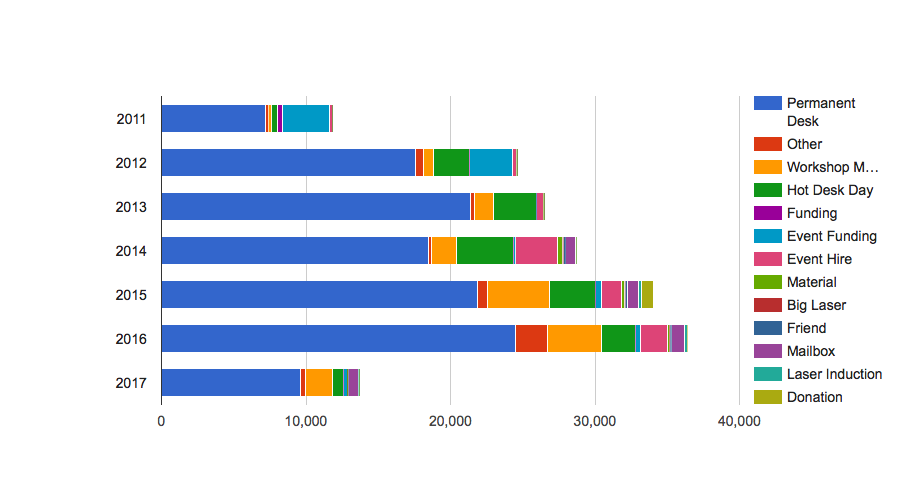 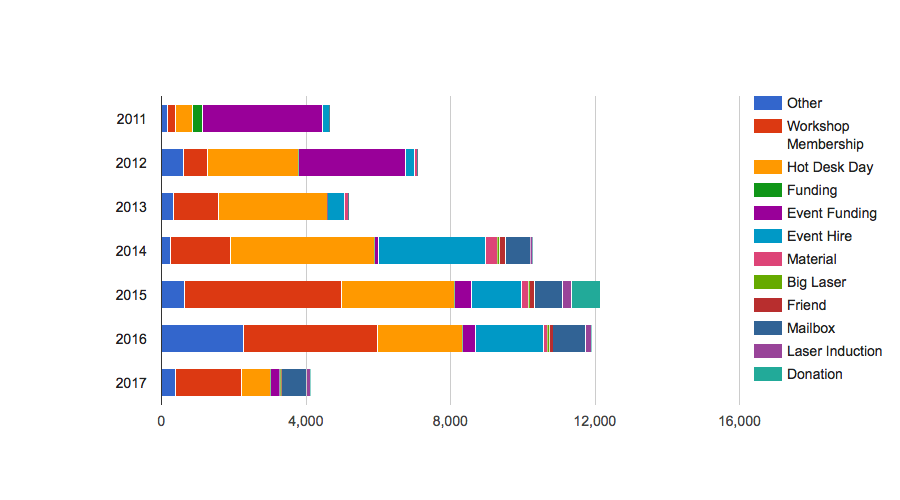 These do show that our hot desk income seems to be dropping, this is something we have perhaps noticed but not taken quite as much notice of as we should. If we’d picked up on it earlier it could have been a warning sign towards the more recent drop off of permanent desks. What reasons might there be for this? Well there’s definitely a lot more competition for hot-desks and flexible lets in the city now compared to 6 years ago. Few of these spaces offer the same community feel you get in DoES but some do, and just the number of people offering similar services can make it tricky for DoES to stand out. We’re well aware that our current space isn’t the most aesthetically appealing but there was little scope for improving it in the building we’re currently in. Our new home will allow us to much improve our co-working offering, both in terms of the services we offer and improving the feel of the space, so we’re confident we can turn this around.

What’s probably not shown so well on that graph is that some of the hot desk visits will actually be people using the workshop. We’re definitely seeing the workshop getting regular use, especially on the two laser cutters but also on the other equipment like the 3D printers.

What else can we do? Well offering new types of service is one thing. The registered address service that we introduced just a few years ago is going well and is bringing in increasing amounts. Similarly the “Friends of DoES” option that came about because Francis Irving decided he wanted to help fund DoES but didn’t need any of the specific paid-for services we had at the time has also helped (unfortunately it doesn’t show up well in the graphs, it will be spread across Funding & Other due to the ways the payments come in). We can also look at bringing in more revenue from hosting events and meetings, our existing events room – Dinky – is quite rarely busy during the day so there’s a lot of scope for doing more with this. If you have an idea of a service DoES should be offering let us know.

We’ve also mentioned in the past about bringing whole companies in to DoES Liverpool, that’s still an option if we can find companies that are interested and would be a good fit with the DoES community. While this would have a bigger impact on our finances, similar to the permanent desks it also gives us a bigger dependency as losing that single client will cause a big drop in our income. One to be careful of but something we’re definitely considering (get in touch if you’d like to move in with us!)

So there you have it, DoES Liverpool is a company that has grown from nothing into a wonderful large community and a mostly profitable Community Interest Company. We’ve had some difficult times but we’ve managed to make our way out of them in the past and we’re quite sure we can do it again.

I actually began writing this blog post not long after promising it back in March and things have moved on a lot since then. While we’ve had the news that our building has definitely been sold and we have a more urgent need to move, we’ve also been able to find a great new home and are in the final stages of finalising that. In the next few weeks and months you can expect more blog posts with updates both on the new space and also on changes we might be making to our offerings to support it. I’m very excited for what the future holds and I hope you are too!

If you are interested in moving a small company in to DoES Liverpool or you would like to run an event in our delightful events room (named Dinky, after the toy cars born in Liverpool!) then simply send an email over to hello@doesliverpool.com. If you want to use the workshop or hot desk then you can mostly just turn up, although you’re quite welcome to fire an email over first. To use the laser cutters you will need to book a slot, and have an induction first.

If you just want to give DoES money to help us make this happen then that’s always an option too! We always appreciate our Friends who donate £9/month by standing order or via PayPal. 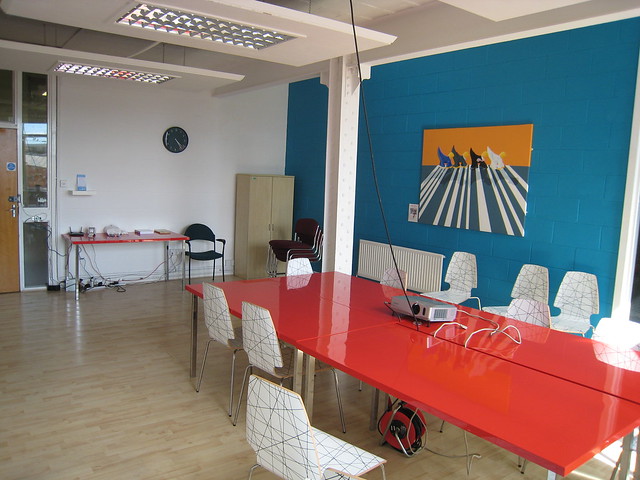